Minitrue, George Orwell's infamous Ministry of Truth from Nineteen-Eighty-Four would have been pleased.

If you hurry to google "ZDF Prognose Hamburg" you may still see a large number of references to a traditional telephone survey sponsored by Germany's national broadcaster, ZDF. With reference to this survey's results about hosting the 2024 games, their bold headline before the referendum was "56% FÜR OLYMPIA". 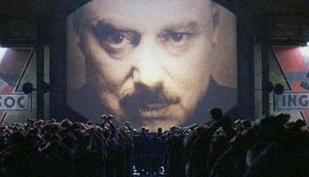 Meanwhile on Sunday, Hamburg's citizens decided exactly the opposite. They did not want their politicians to get their way: 51.6% voted "No" with an impressive 50.1% turnout.

This was not just another polling disaster with an 8% error. The ZDF study had claimed representativeness with a +/- 2% margin of error, given that 3,800 Hamburgers were interviewed, suggesting a clear YES victory with somewhere between 54 to 58%. This fiasco begs the question what these scientific sounding, persuasive error margin claims of frequentist pollsters are really worth.

As my esteemed followers already know, Prediki is methodically recording traditional poll failures, building empirical evidence that the more reliable and accurate prediction market methodology should be used for political questions instead. So entirely unsuspecting, I clicked several of Google's links to add to our document trail. Here is a screenshot for evidence: 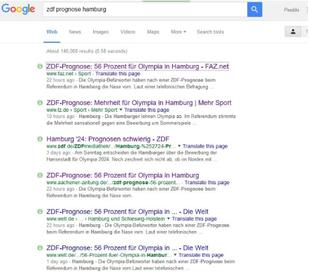 Imagine my surprise that only one day after the event the top two ranked Google links did not lead to the original article with the 56% headline but to completely different articles like "Hamburg Against Olympics" (FAZ) or "Wieder kein Olympia" (TZ). In both of these, the embarrassing ZDF survey is relegated to a mere side-sentence towards the end. Deja-vu?

Get me right, these are renowned print news media, Frankfurter Allgemeine and TZ, so I am not suggesting anything unseemly; in fact, I am certain there is a perfectly valid technical explanation. Also, I still found unchanged news reports about the original ZDF study towards the back of Google, so our records are good now.

However, the picture of 1984's Winston Smith before my inner eye, sitting at his desk at Minitrue with scissors and glue to fix last year's news to the latest political requirements of Big Brother, has received a serious update. Orwellian "Cut'n Paste" would look very different today.

More by the Author: