This question has been settled with a final result: "Yes it will cross without permission". Trading has finished.

Will the Russian aid convoy to Ukraine enter without Ukrainian government permission? 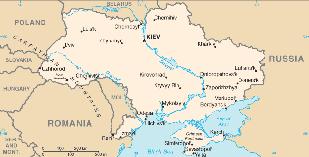 A Russian convoy of 280 trucks carrying humanitarian aid left on Tuesday 12 August 2014 from near Moscow for eastern Ukraine. The 1000 km journey to Ukraine's eastern regions will take a couple of days, probably to a border crossing point near Kharkiv. At the border the convoy shall be transfered to the International Committee of the Red Cross. [1]

A Russian government speaker and and a Ukranian presidential aide cited exclusively humanitarian intentions whereas U.S., French and Australian government speakers expressed concern that the deliveries might be a covert operation to help anti-government rebel fighters [1] or even could be the prelude to invasion [2]

Thursday 14 August sees only 100 lorries continue towards the border, amidst the uncertainty. A Red Cross offical will fly to Kiev and Moscow on a diplomatic mission to clarify border crossing procedure. [4]

On Saturday 16 August, a Red Cross official confirms that security procedures have been agreed between the Ukraine and Russia. The Red Cross now awaits security guarantees for a safe border crossing. The aid convoy has not moved since Thursday. [5]

On Sunday, talks between the foreign ministers of Russia and Ukraine in Berlin, brokered by those from Germany and France, resulted in a resolution of "all" the issues concerning the aid convoy. The issue of safe conduct or a cease-fire, however, remains unresolved. [6]

On Thursday 21 August at 2pm, Interfax Ukraine reports that the first trucks have cleared customs at a rebel-held border point in East Ukraine, not controlled by Kiev forces. 58 Ukrainian border guards have been tenting on the Russian side to facilitate the aid convoy's crossing in the presence of two jeeps with Red Cross officials. [8]